I think many people can agree, that Japan has a special way of making high school seem perpetually appealing. There’s the battle brawler style shonen schools, and the oh-so-romantic shojo schools; there’s just something universally appealing about Japanese high school!

“Koi no Yamai to Yarougumi” or “The Disease of Love, and the Boy’s Club”, loosely translated by me. ‘Yarou’ is a very crude way that guys refer to guys, ‘gumi’ refers to club/group/class. Which brings us to the story, which is a group of eight young men in their 2nd year of high school. In their school, due to the high enrollment of boys, are in the all-boy’s class or ‘Yarougumi’. So while their school is co-ed, these guys rarely have the opportunity to talk to their female peers.

Their unofficial leader, Ichijo Daichi (Takahashi Yuto) sees a beautiful classmate , drop her ballet shoes. He attempts to return them to her, and maybe by chance flirt with her. He fails. His friends all then take a shot at trying to return the shoes to their classmate and realize the horrifying truth; none of them can talk to girls. Thus, they embark on a juvenile journey, as high school boys do, to combat their inability to talk to girls. Their main goal is to get a girlfriend by the end of it all. 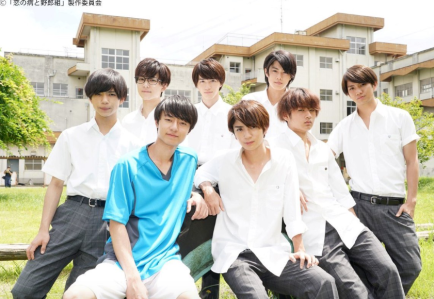 It’s again, another simple premise. Told in an episodic basis, where each young man gets a focused episode on his endeavor in love. None of the episodes get too serious, as they’re told from a light hearted manner in the lens of that innocent first love that many experiance in high school. Don’t be fooled into thinking that it’s rinse, wash and repeat for each member of the Yarougumi. Nor are these situations old recycled from previous series; each premise is fairly unique. Some meet because of forced circumstances, through after school club activities, by chance, and so much more. Oh! And one of the potential romances, has quite the twist for fans and casual watchers alike.

Now for the cast themselves, the main cast is made up of completely new actors. All of our beloved high schoolers, Ichijo Daichi, Yashiro Rintaro (Masakado Yoshinori), Goto Ritsu (Igari Soya), Nanase Makoto (Sakuma Ryuto), Yotsuya Tsubasa (Oriyama Nao), Mimura Ren (Nakamura Reia), Futaba Outaro (Ryuga Sato), and Rokutanda Hinata (Iwasaki Taisho) are all new to the small screen acting-wise. I can tell you for a fact they have acting experiance in theatre performances, or appeared in “Shonentachi”.

(A fun little video of the Jr’s on set having fun.)

Johnny’s Entertainment takes great pride in producing projects that allow their talents to develop their skill sets, and I have to say this time it worked really well! Given that these roles are very similar to the actors current situations (most of them are actually high schoolers), gives them a need ease into acting. Nothing too unnatural or obnoxious from these younger actors. However, they were balanced out by their teacher, Hanaoka Sensei (Hamada Takahiro). Hamada Takahiro also happens to be their real-life sempai, as a member of Johnny’s WEST. Given the breadth of experiance, helps hold the series together as a grounding force in his given scenes.

The series has a great amount second-hand embarrassment type of comedy. Not in the the ‘so-cringey-I-can’t-watch-this’, but rather almost somewhat reflective of the overall high school experiance. It comes off a little cheesy with how many times one boy starts running and screaming, so the rest join in, and then they’re stopped by their teacher who reflects more or less ‘ah, the power of youth’. I had to roll my eyes a little at how often it happened, but even that held it’s charm.

The series manages to be relatable without being overbearing with it’s simple themes and messages. For what it is, the simple story of eight high schoolers and their misadventures in their first love, it’s solid. Being ten episodes, 25 minutes, self-contained stories, it’s one of the better high-school based dramas I’ve seen in awhile.