We Apply For An “Easy” Job – The Drama Edition

It’s increasingly difficult to find normal work. Many jobs are hard on the body, for terrible hours, and minimal pay. Other’s have a never ending list of qualifications you ‘must have’ in order to even apply for it. For either job the hours are insane, and mental draining. There’s no other country that embodies these ideas quite like Japan, for better or worse. 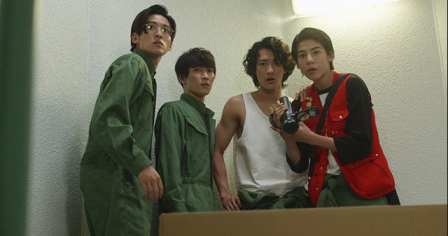 Enter the idea of freeters or ‘フリーター’ in Japanese. While very similar in image and idea to ‘NEET’, Freeters are those who lack full-time employment, are unemployed which excludes housewives and students. It’s a much more gentle term, and tends to have the a more positive connotation that these Freeters are in search of work or pick up odd jobs.

Thus enter our characters, Hayaka Yu (Iwamoto Hikaru), Yanagai Keiichi (Watanabe Shota), and Akita Wakadai (Meguro Ren). Lastly, they are joined by the videographer, Hyakuhon Gon (Raul). Yu and Keiichi are two individuals who have adapted the freeter lifestyle in full, picking up odd jobs online. Wakadai is technically not a freeter, as he attends university, but does suffer some fiscal struggles while studying. The group of four meet up daily to do ‘easy’ jobs. Of course, while the tasks are ‘easy’, the ease of the task does’t always add up.

(Above video is Miyadate Ryota, Abe Ryohei, and Sakuma Daisuke visiting the set and doing a challenge to decide who got to cameo in the drama!)

Honestly, I was hooked very easily. Anything with Snow Man in it, I am immediately interested in. This drama was the main reason why I ended up getting a Hulu account in Japan, just to follow this drama’s exploits each week!

The premise was interesting, consider it was tagged with ‘horror’. Which is not my preferred genre of anything really. Given it’s more or less a Johnny’s drama, with the main cast all Snow Man, I knew it wouldn’t be too hardcore. It wasn’t in the sense that aside from one or two jump scare style events, the drama didn’t really lean too much into the horror troupes. Instead, it took a very Japanese approach to it.

“We Apply For An Easy Job”, took modern atmospheric horror very seriously. The situations were already a little suspicious. Given that our cast are taking ‘easy’ jobs from an online job forum similar to Craigslist, most of us are already that cautiously uneasy at the premise. I’m sure we all have, or know of, something bad happening. Without getting too in-depth, each situation is indeed a short form horror story. From something as innocent as ‘deliver this package by a certain time’, ‘take pictures here’, and ‘answer the phone without hanging up’; that all seems easy. Too easy of course.

(Snow Man, all nine members, getting some on the job training for an “easy” but under appreciated job.)

It’s delivered very well in short and simple episodic form. Each episode opens and closes the mystery/horror within the 25 minutes in a satisfactory manner. Not too in depth, with too many loose ends, but a succinct and well done story. Of course, the ending of each episode gets a bit corny after awhile. It does help lighten the mood of the narrative without being injected unnaturally somewhere in the middle.

I was pleasantly surprised at the acting of all the characters. Impressively, Iwamoto Hikaru has graduated from being the number one scary cat in Snow Man, to being able to convince the group the situation isn’t scary at all. On the flip side, Meguro Ren who was Hikaru’s protector in previous Jr Channel videos, manages to pull of the easily scared college student well. Watanabe Shota doesn’t slack off either, delivering a cautious balance between the two. I can’t get too in depth with Raul’s character without major spoilers, but he’s a very intersting addition to the dynamic not only acting-wise, but story development wise as well. 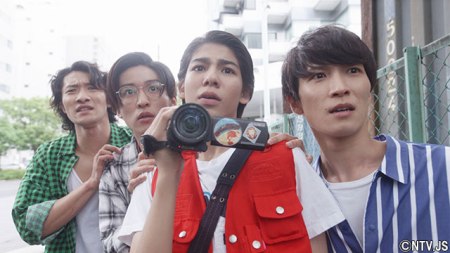 If Japanese atmospheric horror is your thing, this series will deliver. If you also happen to be a fan of Johnny’s group, specifically Snow Man, this series is well worth it. It’s a simple but well done series.