Before the whistle – Break Free!

It feels like ages since I wrote a recent manga review! I have such a wide variety of series on my shelves and had the time to sit down and read a few of them finally. While I have since bought even more manga since my last haul, I am ready to give my thoughts on the series I have gotten through.

Re-starting my manga reviews, I had to start with Higuchi Daisuke my favorite mangaka. I had lived in a very strange bubble that she had never done any work prior to “Whistle!” and that is absolutely in correct. One of her predecessor works to “Whistle!”, was “Break Free”. The volume is actually five short stories, she had worked on. The series being “Break Free”, “Itaru”, “24 hours”, “Singing Flame”, and “X-Connection”.

“Break Free”, was most enjoyable and the best story to start off with. “Break Free” was the obvious precursor to “Whistle!”. You can tell the earlier character designs for Shigeki Sato, Tatsuya, Katsuro and a few others who get fully fleshed out in “Whistle!” make their appearance in this story. This short story really serves as the original backstory, or draft of a backstory for Shigeki Sato. Higuchi-Sensei fans are well aware the author has quite the soft spot for the rebel, given that Shigeki regularly outranked Sho in the popularity polls, and even got quite the big backstory reveal in the full story. Seeing the more raw and simplified version was really nice though. You can tell Higuchi Sensei knew she had a good thing, but needed to add in other elements and really take the time to flesh it out. And that’s how we got “Whistle!”. 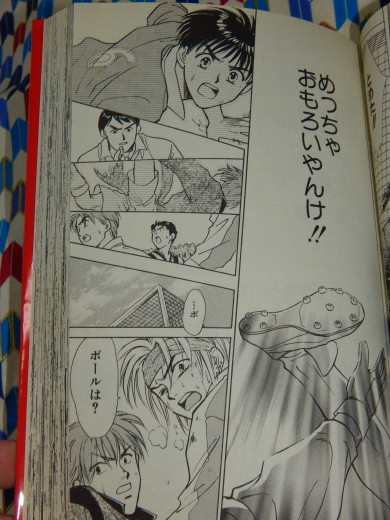 “Itaru” in contrast, serves a completely different vibe. Mostly because “Itaru” is the first one-shot manga Higuchi-Sensei ever wrote! It is based off the experience of an author recounting his paranormal experience with “Itaru” in Jr. High School. It has a lot of elements of early 90’s manga styling, that even now retain some charm. I was really surprised to see this was her earliest work, since the story, should it had been fleshed out into a larger release would have been amazing. Still, the humble beginnings and working of “Itaru” laid the ground work for her supernatural series “Dokushi” (which I finally have my hands on and will read and review!).

Following in the aptly named “24 hours”, a story which recounts a young male heir, Kurosu Kyousuke (, and his grandfathers dying wish. Kyousuke is a very serious young man, who has often isolated himself in order to properly succeed in business. His grandfather asks if Kyousuke has a close friend, Kyousuke lies and says yes. His father says Kyousuke has “24 hours” to produce his friend to him, before he will let Kyousuke succeed him. Its a somewhat zany story, very rooted in rich-kid shenanigans troupes but nonetheless a very enjoyable read. Seeing familiar faces in different situations then I know them originally from was a very fun read.

The manga takes a brief break from the characters of “24 hours”, to see into the situation of “Singing Flame”. Kaku-Sensei is a science teacher that is well liked and often confided to by his students. Eguchi is one of said students, who had just seen his grandfather had committed suicide, or more likely in his opinion been murdered. This story plays more into the ideas of a mystery series or suspense-thriller, something that again Higuchi-Sensei would later use in series like “Dokushi” or the one shot manga “Sprit of the Departed”. Again, similar early 90s art, that while dated holds up fairly well. It was a simple premise, but had all the makings of being the groundwork of bigger ideas in the future.

It then closes once again, with “X-Connection”, a revisit to the characters of “24 hours”. Published in 2001, it serves once again to clean up some character designs and character traits. Again, some very similar shenanigans from “24 hours” ensue, and the notorious but nonetheless iconic bridge scene occurs for the first time. I will clarify that in a moment, its certainly a more interesting element Higuchi has used. Seeing this revisit to these characters is endearing, seeing that many authors often one and done characters. I didn’t see it in order it was originally published, it was oddly nostalgic even more me!

What I really loved about this manga compilation, is you can really see the progress of Higuchi-Sensei in a meaningful manner. She started small, curating short stories that laid the ground work of what would become her larger series. From character designs, to premises, even just seeing her experiment with how to tell a good short-form thriller/supernatural story, how to set up character motivations, etc. I might be incredibly biased but I think more authors should publish these compilations! As a fan of the author, I am truly curious about these little details that built some of my favorite series!

Another thing about this series is that you can tell Higuchi-Sensei isn’t afraid to take elements she made, that worked well, and transplant them into her bigger stories. A lot of mangaka, even authors I think, are afraid to do this. Its one thing to self plagiarize by taking a character design and only change the color palette and just change a personality trait or two (many mangakas are guilty of this). However, as long as you don’t reuse that story element a million times, I don’t see why taking it from a short form piece and transforming the context into a longer series can’t be a thing.

This compilation was only published in Japanese, legally at least. For those who want to read in Japanese, there is a generous use of furigana making this series incredibly accessible for all levels. The grammar patterns are fairly easy to identify and read. The difficulty of the vocabulary fluctuates between short stories, with “Break Free” being the easiest to read followed by “Itaru” depending on your exposure to manga before. “Singing Flame” has a lot of technical terms for science, and “24 hours” and “X-Connection” being next with more business/political terminology. However, it is able to be done and repetition makes it easier to read.

When it comes down to it, for us Daisuke Higuchi fans “Break Free” is an excellant complication manga volume showcasing the earliest works. While only in Japanese, its worth it for those who are fans who are daifans (a pun there). I know for me, I was so happy for this easy to read compilation of my favorite author.