So I want to give Biblionyan credit where credit is due because they re-started? Made me aware? of this tag. Let’s say they may not have created this tag, but they brought it back and brought it to my attention so that’s good enough for me! It’s actually fairly amazing that I’ve never actually watched STRANGER THINGS. I mean that seriously. I’m aware of what it is, and vaguely characters but I’ve never watched. Netflix and that sort of thing is just… not a good idea for my lifestyle at the moment lol.

There’s no particular rules to this tag, but I appreciate Biblonyan for allowing us to use anime and manga. I am woefully under-read these past few years. If it wasn’t my shelf and hadn’t special ordered it, I wouldn’t be able to tell you the last book I read. So, sticking with printed media I am going to utilize manga for this challenge. Without further ago, here we go~

1. EPIC INTRO: The opening sequence of Stranger Things is amazing and really grabs your attention. Name a book that grabbed your attention from the first page.

This manga got my attention not necessarily from action, but from surprise was “Whistle! W” is the follow up and or sequel to the original series “Whistle!” both by Daisuke Higuchi. I read all of “Whistle!” in Jr. High School/High School. So when I found out she was writing a sequel, I immediately sought out all available volumes and upon reading was immediately hit with nostalgia and ready to dive into a new set of characters.

2. DUNGEONS & DRAGONS: Name a fantasy world you would like to experience yourself.

For this I have to absolutely pick the world of “Mushishi”. Seeing Ginko experience his particular world is so interesting given he’s considered to be really unique even within this fantasy world. I’d like to see what kind of character I would be. Would I be able to see mushi? What kind of mushi would I attract? How would I experience the world knowing some things are influenced by things that can only be seen by a select few…

Knowing my luck though, I would probably have a health related mushi affecting my already not great condition. ^^;

3. SQUAD GOALS: When Eleven met Mike, Dustin, and Lucas it was a mostly perfect team. Name your favorite bookish group of friends.

For sure the friends and bandmates of “NANA”. Not only are they all unique characters, but their dynamics are so true to life that it’s a little scary. I can’t decide if I’d be closer friends with Komatsu Nana, Osaki Nana, or someone else. Probably a mix somewhere in between, and I wouldn’t mind it much.

I mean super technically Subaru Sumeragi from X/1999 falls into this category. He’s not unhinged in the way a lot of characters are portrayed. Subaru, despite knowing he should be doing the “right” thing for the sake of humanity, is often undone by his own unresolved mental health issues. Instead of destroying things or something more chaotic, his form is usually the opposite. He easily backs down or balks when it comes to Seishirou, and at times it could be argued a lot of important battles are lost because Subaru will abruptly stop fighting due to a flashback or PTSD trigger. I understand him so much, and have such an appreciation for his backstory that well, thus he’s my favorite ‘unhinged’ character.

5. THE UPDISDE DOWN: Name a book that was the opposite of what you expected.

I needed to review series for this, but… the Godchild series by Kaori Yuki. I knew that Kaori Yuki’s works are know for being a bit unpredictable but… this was not a shojo series in my eyes. It’s still an outstanding series all these years later, from plot, characters and of course the unforgettable art but man… I had no idea what to expect and even then everything was opposite of what I expected!

6. MAD SCIENTISTS: Dr Brenner likes to get freaky with humanity. Name the freakiest dystopian government you can think of.

This one is easy, the government in Battle Royale. Which is technically a book and manga so I actually got back to the book part of this challenge! Any society that would set  up a class of students after bonding (for better or worse) to then turn around and kill each other instead of graduating is undoubtably freaky to say the least. 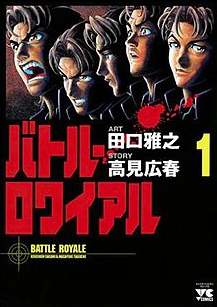 7. DEMOGORGON: Name a scary bookish creature that you would not want to come through your walls.

One that always freaked me out on their premise alone is the Gaichuu from Tegami Bachi. These creatures feed off the hearts of humans, sometimes from their letters (hence the premise), and other times they go right after humans themselves! They vary in size, location and abilities and they’re after my heart? No thank you fam, I would rather not.

8. CLIFFHANGER ENDING: Name a book that left you wanting more.

I was going to cheat and use a literal unfinished series, but like I said that felt like cheating so nope. I really had to think about and consider a series that if the next day a new installment was on the shelves I would buy it and that is, surprisingly Wanted by Matsuri Hino. It’s a pirate romance series that was really short, but actually incredibly engaging. I owned the volume and re-read it often when it was in my possession. You just don’t see so many experimental sorts of situations in shojo manga anymore so even if it was bumped up to just one more volume I would be interested in seeing where it would continue.

Tags; no stress or obligations to this but if you’d like I’d love to see your answers!

Fan Of A Certain Age

With that, my strange time is over… for now…