Worth Catching? – Ride Your Wave Review

Sometimes impulses are good. Sometimes impulses are so impulsive that you can’t even buy popcorn or a drink because you need to sprint to the theatre. The latter was my case when it came to seeing ‘きみと、のれたら’ (Kimi to Nami ni Noretara) or Ride Your Wave. I had fully intended to see Promare but tickets had sold out, and I was already at the theatre so I wasted no time changing plans and quickly turning around to watch.

I was going to see this movie for two reasons. The first, and lesser reason was that Science Saru (aka Science Monkey) was the studio behind it. Given how much I loved ‘Lu Over the Wall’ and how unique the animation was for that I knew that this movie should be a similar vein.The second and arguably bigger reason I went and why I tend to go to many Japanese films is; a member of an EXILE TRIBE group would be in it. This time around it was Katayose Ryota of GENERATIONS from EXILE TRIBE debuting as a voice actor. As soon as he announced it officially, I knew I would be going. Additionally, his group was hooked into the theme song of the film Brand New Story which you can watch below. It has original animated characters of all seven members, as well as animation from the film itself!

Before I get into the story itself, I will give you a word of caution. Listen to the above song before considering watching this film. It plays a reoccurring part to the film, so if its not to your taste… I warned you.

Now lets get into the details. The film opens with Mukaimizu Hinako, moving to a new city near the ocean to start school. Although, like most good college studios Hinako is more interesting in catching waves then unpacking or attending class. She is a fearless surfer, but isn’t certain that college is in her true future. During her exploits around town, she eventually meets the fire brigade and ends up by less then optimal means meeting the firefighter, Hinageshi Minato. Minato has a very strong sense of justice, and a very assured future. Drawn together by surfing the two grow closer, taking in each others faults and weaknesses.

I promise, that this is not just simple love story it starts out with. The starting point is certainly grounded in reality, and it’ll warm your heart. Can we appreciate that the characters are in college and not high school for once? Yes, we can and do. Or at least I did. Minato and Hinakos relationship melted my heart, despite it being set near the ocean. Its so earnest and sweet, so when the tide changes… I’ll admit it I cried in the theatre more then once.

Backtracking to the characters relationships, this story really explores human connections. The types of relationships between co-workers, siblings, and how one person connects to another. Its not just all about Minato and Hinako, but the people around them too, especially after the turning point. UGH, I want to talk so much more about the relationship between Hinako and Youko (Minato’s sister) but then spoilers!!! Seriously, I know I’m making excuses but its worth watching to see the interpersonal relationships beyond romance.

For all the good I have to say about this film, there is one problem. That is, admittedly Katayose Ryota’s voice acting. I think people unfamiliar with Katayose Ryota the person, wont have the same reactions as me if any at all. People pickier then I about seiyuu will have more technical critiques about delivery but I personally didn’t see anything glaring or movie ruining. The problem lies in Katayose Ryota’s voice itself.

Ryota has a very distinct vocal color both singing and spoken. I do not have the problem of distinguishing Ryota from other vocalists or actors. He also has a background in acting, which is helpful although not exactly a requirement for voice acting. The main problem is I had a hard time not correlating this role as anime Ryota verses, Ryota is playing the role of Minato if that makes sense.

For the early part of film when Minato starts speaking, I had a jarring moment of ‘this is Katayose Ryota’s voice but it is not him on screen’. I had my doubts about him in this role, and unfortunately a few of them were true. I don’t think they got him adequate training for voice acting, or gave him strong enough directions to make Minato’s voice distinct from his own voice if that makes sense. I felt that it was a weird moment of this is animated Ryota speaking, not the character of Minato. Given some of the reoccurring events and plot points in the film it does make sense why they recruited Ryota over a more seasoned voice actor. I’ll leave that for you to understand during viewing though. 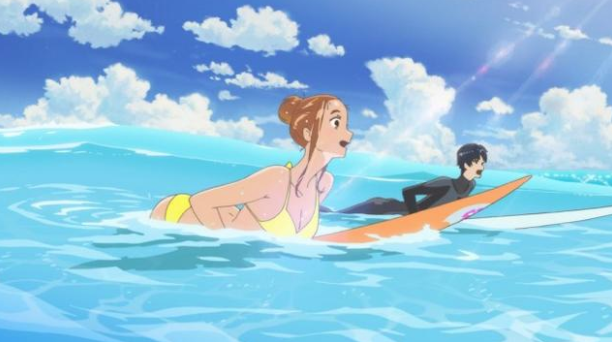 Before I dissolve into a sea form of further feelings, lets talk about the animation. Going off initial feelings, it was beautiful in my eyes. While it wasn’t necessarily what people would consider fluid or pretty, I found it attractive in it’s own right. The way that emotions were conveyed in the non-standard animation was so amazing. The whole scene comes together to change the mood, not just the background or just one character. I really want to do scene comparisons, but spoilers so I can’t at least not now. If you’re looking for something that takes the animation keying into emotions and relational situations this is it.

Of course, comes the conclusion itself, which I was highly satisfied with. It’s not an ending you can fully anticipate, so there is some fun in watching until the end to see how it all ends. It’s not a neat little box with everything wrapped up, theres a few open options left to your imagination but nothing critical to the point where you’ll be frustrated. I personally found the story incredibly satisfying from beginning to end.

My final thoughts, don’t write this movie off as just a romance! I only gave you the crest of the wave that you can see from the surface. I highly recommend you grab your board and get out onto the wave yourself to see how smooth the ride is.