I have to say I wasn’t planning on following anyone or any group from Kpop this year. There was a particular site that floated Yukika’s name and the fact she was taking City Pop to Kpop that got me curious. The worst that happened is the song sucked, I didn’t care for her vocals, etc and let it go. I’ll admit it right now; I was impressed.

Before I get too far ahead of myself, I should explain a few pieces of background. Firstly, what exactly is City-Pop? City-Pop is a genre of music from the late 70’s the originated in Japan. City-Pop mainly reflected on the theme of living/working in the big city, especially Tokyo. During this Era their was also influenced by Western music such as album-orientated rock, jazz-fusion tracks, and New Music. However, this Era of music was quickly quashed when the economic bubble burst in the 1990’s in Japan. A lot of traits of City-Pop migrated to Shibuya-kei.

Recently with the viral sensation of 80’s idol Takeuchi Mariya’s “Plastic Love” and others, there has been a resurgence of interest by the global community. I won’t say there’s a new crop of city-pop idols, (yet), but YUKIKA seems to be the first to take the idea, literally global.

For a bit of background on Ms. Yukika herself. Yukika was the only Japanese member of the Kpop group, Real Girls Project. It was a ten member group that was created in order to act in and promote the drama “THE IDOLM@STER.KR”. THE IDOLM@STER.KR is a 2016 drama, based off the popular Japanese game, “IDOLM@STER”. A fun fact is that she was the only Japanese member of the unit. The group existed from 2016 to 2018, but seems to be inactive at the time of writing. More information regarding Real Girls Project can be found here.

She has a bit of acting background, landing the main role of Sakurai Choco in “ChocoMimi” (2007, Japanese), “THE IDOLM@STER.KR” (2017, Korean), and recently a guest spot in the Korean Special “Hello, Stranger” (2018). While, I haven’t watched these yet, she shows a lot of promise as a budding actress. It’s worth noting that she was also a voice actress for a handful of anime characters as well.

Currently she is the only female talent in the company. Sungtae, the current male talent will be made his debut on June 2nd. Which makes me a bit nervous since Kpop does not have a great record with small companies managing single talents/groups. She did appear at KCon Japan 2019 so that’s a pretty positive and big step in the right direction!

Now with all that out of the way, we can finally catch up… to February 22nd, 2019 when she debuted as a soloist with “NEON”.

Given it’s a digital single, not a full-fledged release there’s not much data to gauge how ‘well’ it did. There’s no information regarding a chart position on Melon/Bugs/Hot 100. About the only ‘chart’ position I could find is 16th in one of her M COUNTDOWN performances. This particular position isn’t really indicative of much in my opinion. Chart position are nice and all, but it doesn’t show much beyond a fanbase can be mobilized to stream/buy x amount of CD’s etc.

I’m not surprised since Yukika is an indie idol with an indie company. Having a giant splash on the scene is wishful but a bit impossible given the climate. It’s nice to see that her efforts in Real Girls Project and on MIXNINE weren’t for naught; a lot of commentators recognized her from both previous projects. I’m glad the goal of exposure has show to work a bit, for once, no matter how small the scale.

Given that Yukika is Japanese, and now performing as a KPop star I’m more curious about how the reception has been by Korean fans. The international fanbase, as they tend to do has been heaping the praise. Obvious connections to City-Pop and Yukika being an under-appreciated ‘queen’ have been stated more then once over in English. Don’t get me wrong, it’s nice that the community hasn’t viciously gone after her but Kpop is geared to Koreans. Having an international fanbase is wonderful, but the money and promotions are aimed in to the Korean public.

Most of the Korean comments I’ve seen are on the debut MV itself. Surprisingly, most of the comments have been supportive and sweet. Korean fans aren’t stupid and know that she’s combining city-pop with KPop. They aren’t particularly mad about it either since there was a bit of city pop in the mid-90’s in Korea as well. A lot of fans have remarked that her pronunciation is really solid, surprisingly so. There’s been a few comments of her pronunciation being ‘cute’ but, I haven’t interpreted this to be a bad thing. Most importantly, many fans in Korea have encouraged Yukika to continue promoting and her efforts! 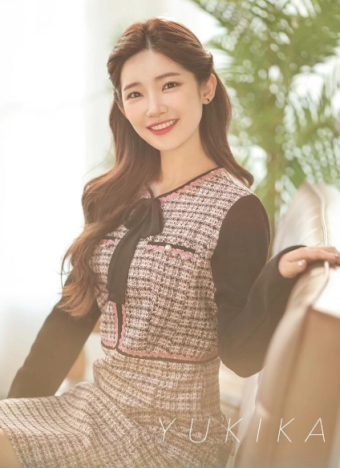 So now that the background for Yukika is complete. What exactly were my thoughts? As originally stated I was very impressed. ESTIMATE Entertainment was incredibly generous with Yukika’s debut given their standing. The video is slick with solid use of sets and ‘storyline’ to keep it going. I’m glad that they’re giving her back-up dancers and choreography as a update to city-pop. Her standing behind a mic just smiling like her predecessors would not have quite gone over so well. Depending on how she develops as a soloist it could be an option for a special stage in the future.

She has a variety of outfits worn in and out of the MV, that are fantastic. The attention to period detail, without looking completely dated is outstanding. She has 7+ stage outfits she’s performed in showing that ESTIMATE put in the effort to promote her on various shows and events without her looking repetitive. Given that they’re such a small company, it makes sense.

Lyrically, the song is a bit… repetitive. Such is the nature of a debut track and for City Pop to be honest. Don’t let that statement fool you into thinking I don’t like the song. I’m still replaying it regularly and even bought it digitally so I can listen off-line as well. It’s a well produced track, that took time and effort to replicate and update the genre. The content
plays well into the standards of city-pop hitting all the ‘must-haves’ of the genre. It’s the beginning of a unique concept and fusion that many fans are eager from the looks of it, to see more of.

Personally, I’m hoping she’s been able to doing some busking session around Seoul at night. That would literally be the most perfect promotion for her at this time, but I haven’t seen videos of that. Now that it’s been written/spoken of, I sincerely hope it comes to fruition. I can see her being an incredibly modest, but successful act with the right promotions in Korea. If all else fails, she could easily transition back to Japanese turf and maybe bring a second wave of city-pop idols.

I’m not saying she is do-all end all at the moment. She has very solid footing talent wise, and at the moment seems to have some monetary fire-power as well. Here’s hoping ESTIMATE keeps the momentum going and we hear a follow up soon! I’ll be sure to keep you all in the loop when it happens!