San Nen A Kumi; All is not as it seems

Gonna be straight up with this for a warning; there’s suicide, bullying, cyberbullying, implied sexual harassment/assault, and a few other trigger factors in this series and in this review. A head’s up for those who are sensitive for one or several of those. I highly recommend not reading/watching this blog and series if these elements are worrisome for you.

This was a series that I was completely satisfied with watching for one simple person; Katayose Ryota. It’s very easy to sucker me into something with certain actors and this drama was no less one of them. Given the series also aired at 10:30PM on Sundays, it allowed me to have a bit of commonality with my teachers the next day. Which was a nice added bonus.

The story, is rather dark. In class 3-A of this particular school, a student Kageyama Reina (Kamishiraishi Moka) a promising swimmer, committed suicide earlier in the year. The students had bullied her and then turned to bullying their unassuming homeroom teacher, Hiragi Ibuki (Suda Masaki). The unassuming art teacher has a secret plan, which he sets into motion ten days before the class is set to graduate.

He commits, for lack of better words an act of terrorism in the school, allowing all other classes and teachers, aside from himself and his class to flee. He announces that his personal lectures will be their last ten days of curriculum, and will be about uncovering the details of Kageyama Reina’s death. The kicker? The other students are now Hiragi Ibuki’s hostages and the world, including those on the SNS platform Mindcast are participants and observers for this situation. The students must work together for the next ten days to uncover the truth, or they won’t graduate… or worse… 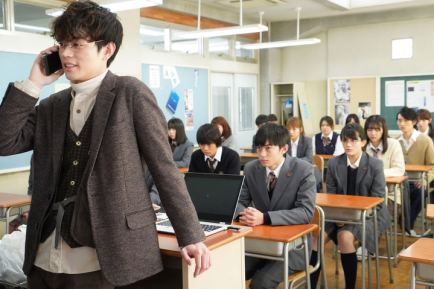 When I tell you no one anticipated the scope of instability that this series would take, I mean it. From the first episode set up, to all the individual set ups and revelations from one character to another there’s so much that’s good about this series. The main characters that contributed ‘significantly’ to Reina’s death including her best friend, ex-best friend, the resident bad boy, a fellow swim team member, a classmate with a gangster boyfriend, a rejected admirer as well as the classroom culture is explored. Where you might see a set of stereotypes waiting to be confirmed, there’s so much more.

Not every single character gets the chance to shine as a contributing factor. It’s impossible in 10 episodes to get to everyone, but damn does this series try. Every character gets fleshed out individually, or at least by association. We learn about the dynamic of the swim team from an ex-member mostly, which leads to the other voicing their own perspectives. The progression for all the characters is natural and realistic, verses the forced backstory and motivations that too many series use. 3rd year in high school is hard enough, but adding in the concerns outside of the classroom for these kids only amplifies this.

Of course, there’s a fair amount of progression of the captor, Ibuki-Sensei himself. Despite his dramatic changes, slowly we peel back the layers of how he got to where he was and his own motivations. Complex, but a bit slow burning as much as you’ll be invested in the kids, Ibuki has his own appeals. I don’t want to spoil anything about it, but honestly, Suda Masaki is fantastic. I use to think he was an over-hyped actor, but I was completely wrong. He was an excellant choice for this series.

Personally, I was very surprised by this cast as a whole. A few characters to watch out for are Suwa Yuzuki (Imada Mio) , Usami Kaho (Kawaei Rina), Aizawa Hiroki (Hagiwara Riku), and lastly my personal scene stealer though for no reason other then being pretty is Makabe Kakeru (Kamio Fuju). Genuinely, the cast being being relatively young and with many of them this being one of their first ‘darker themed’ drama; it’s a cast of up and coming actors and actresses that I am incredibly and genuinely curious where they will go next.

The pacing for a suspense series was absolutely on point. The timeline and set up was well done, and you can tell there was a lot of time put in to have all the pieces line up just right. No one could obviously, tell where the story would turn to next, or just who would end up being the true ‘perpetrator’ as a whole.

Even with limited sets, the cinematography as a whole was solid. The subtle changes between how characters would be highlighted, what time of day and during what events said a lot. No overdone sepia or black and white tones, but rather the narrative director and set up allowed for much more natural-looking flashback scenes.

Overall, up to and through episode 9; this series keeps you engaged for all the right reasons. It was a series I looked forward to watching every Sunday, despite not understanding everything said. It was engaging just because the story drew you in and the characters kept you sticking around for more as it should be.

Unfortunately, episode 10 took all the build up, the careful curation and direction, and kinda just dropped it on the floor. It was very obvious that either the network or someone higher up didn’t like the original ending, and wanted to twist the ending message to be more ‘viewer friendly’…. ugh. It was not satisfactory in the slightest.

Not to mention overall, the writers simply didn’t research some elements that I consider to be pretty damn important to have a satisfactory ending.

There’s some severe spoilers, and triggering factors discussed below the break so please skip if you’re inclined. It’s more or less my more in-depth commentary about why this drama was dissatisfactory for me.

Now for the major problems with this drama; it’s ending. It’s not satisfactory in the slightest. With all the reveals of who did what that contributed to whatever, you would think that the drama would finally lead to a final perpetuator and justice would be served. Nope.

Instead, god bless, the network decided to force feed an anti-SNS, anti-bullying campaign.  No single individual character killed Reina, the internet as a whole did! It’s the general nature of the internet and how mean and evil that people are that forced this girl to suicide!

Nah fam, there were some real world people actively bullying her in real time. That type of bullying where you have a name and face, is twice as bad as just anon trolls. The actions of some her peers, despite their ignorance to the bigger picture, seriously put Reina in actual danger more then some SNS trolls did. Ignoring at that and putting it all on SNS trolls is BS. It’s such a forced and non-linear inclusion to the narrative that it hurt me to see the final episode. It’s very obvious, due to the popularity of Twitter in Japan that Mindcast is the much more evil version of Twitter. But seriously?

I don’t disagree that this is an important message, and it should to incorporated now more then ever. But there’s a ton of flaws with this inclusion. The first is, we never see Reina interact with Mindcast. I can not recall a single scene where this girl is actively on Mindcast, writing, reading or responding to people. In all ten episodes, I can say that maybe she glanced at it once or twice, but never long enough to show the impact it had on her.

The main character that was supposedly driven mad, to the point of suicide by this evil SNS platform; we never see her interact with it. Seriously? You’re going to build a whole set of steps to where classmates inadvertently contributed factors to her death, but the character herself never participates? I get that some things should be implied, but with such an emphasis, there should be at least one or two obvious moments of her interacting with it. A cut scene, flashback, something. But no.

Walking back a touch, is the whole part where Reina was driven ‘mad’ by SNS. I’ve made it clear that this girl barely interacted with the service. However, the writers completely, and I use this specifically, fucked up Reina’s mindset. There is no indication in her character that she has any previous mental illness. Yet they have her hearing ‘voices’ of SNS users in her head, which is triggered when Sakura barely glances at her phone to reply to a text.

That’s right ladies and gentlemen; when you’re suicidal you suddenly start hearing voices. It was so obvious that the writer didn’t research how SNS actually influences those who are suicidal. Instead they copped out and mixed in other sets of mental illness in there for effect/impact. You would think given the plethora of data, especially in Japan about school age suicide, that the writers would attempt to accurately portray those impacted. Nope. It’s a gross misrepresentation of those currently struggling with suicidal thoughts, and those impacted by the loss.

The use of ‘voices’ in a character actually being driven into a corner by SNS, was way better used for Takeuchi Yamato’s character. Him having a very public fall from grace, and then having it broadcast online was significantly better done and made much more sense. To lump in a girl who was not only a victim of his character and SNS, with him was just disrespectful.

My final thing, is if this drama is suppose to have an anti-bullying campaign; where’s the message about curating your online experience? You can not put the blame on society as a whole. Doing that is not gonna do much, other then feed trolls. There has to be some basic responsibility on those who use these services.

SNS is unavoidable in this day and age, and bullying has existed since always. If this series really wanted to push a better message, there should have been discussion of blocking users, how important it is to make certain profiles private, reporting abuse/harassment, potentially avoiding certain sites in general, and overall how to make your SNS experience safer.

Instead, the drama completely ignores the reality of this, and just goes ‘SNS is bad and everyone is the boogie man and sometimes you know your boogiemen!’. There’s some nuggets of truth in the story’s ending, but it’s so half-assed and butchered that it’s hard to be satisfied with this conclusion.

Overall, this series has a big set of positives going for it. The premise is fresh and dare I say fairly controversial for Japanese television. The plotting, pace, and cast of characters for a suspense story is done way better then many previous series. The cast itself is set up with some tried and true talents, as well as a huge batch of up and coming actors and actresses. However, the biggest pitfall is the cop-out ending which contrasts severely with the majority of the series.

Personally, even after watching the whole series and my long-winded articulation of a lot of major problems; I still recommend giving it a watch. If you go even knowing the elements of the ending, I believe it has enough engagement power to overcome it’s short fallings. It’s not a top recommended series for me, but one that I highly believe shows Japan still has some tricks up it sleeve for this year.