I had originally intended to update once a week with new content about all the Johnny’s Jr. groups… only to realize that their schedule for uploads was posted, and that talking about 5 different groups all with 5+ members is… a lot to ask without getting seriously confused. So instead, my goal is once every 4 videos (so monthly) is posted to review and maybe translate some content of the videos. Hihi Jets update every Sunday… so here we go!

Their March 25th post, was all about their series of proving proverbs if they’re right or not. So~  The first is ‘putting eye medicine from the second floor”. Say what exactly? 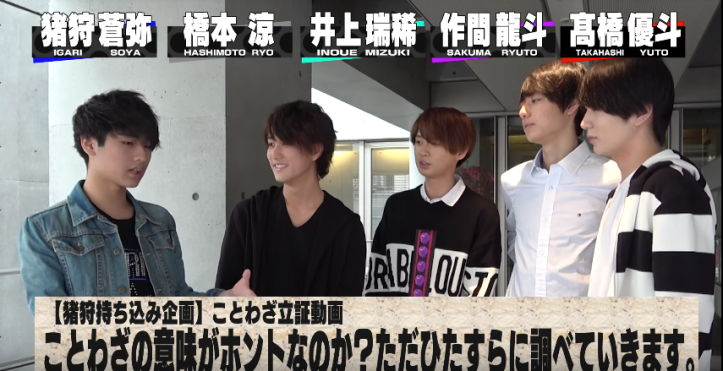 Ryo’s interpretation is… putting eye drops from the second floor is a punishment… game… for children…. Okay, Ryo. He said it’s discipline for children but Ryo… that’s not how that works.

It’s actually a metaphor for doing something inefficiently. Not to mention, it’s also incredibly difficult to do. So they decided two people would drop the eye drops from the second floor, one person would ‘catch’ them, another to record, and the last to judge if it went in or not. 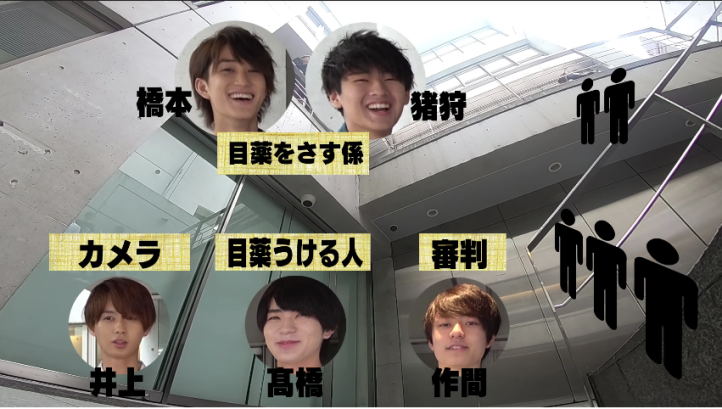 Soya and Ryo were the second floor eye droppers. Yuto lost and became the catcher. Mizuki was in charge of camerawork and Ryuto was their judge.

Yuto made some serious attempts to get out of it… but no one was having it. After some adjustments they finally found their way of doing it. Ryo and Yuto were not making it though… so Soya stepped in to ‘pitch’ so to speak.

They finally made it! Only for Yuto to close his eyes. Opps. So Yuto since he was scared asked Ryuto to hold his hand.

Even with the power of hand-holding, Ryuto switched in as ‘catcher’ to Soya. After some adjustments like bending your knees, covering one eye to see the distance, they switched back to Yuto who finally caught it. It was a long challenge, but ultimately it was proven true. Although sometime in the future they might try from the 3rd or 4th floors.

Their April 1st video, was not a prank video surprisingly. This time around they tried Soya’s plan which was to read bed-time stories to their fans, aww. Instead of just reading from a book (copyright, I can sense it) they decided to go withs stories they memorized or could act out. They listed ‘Momotaro’, ‘Kintaro’, the three little pigs, and more… but finally started asking about favorites.

They asked Ryuto who couldn’t remember the story and said ‘Urashima… a sea turtle?’ It’s Urashimataro, a human who saves a sea turtle. Pick something you can remember Ryuto! Mizuki decided for them that they would read “Little Red Riding Hood”. Ryuto, since he has a ‘cool’ voice was going to the the reader. He only remembered the characters though…

Their drawings were pretty cute but Ryuto made a mistake when speaking… baguette verses basket in Japanese… okay. I forgive you. In this version… the wolf eats little Red Riding Hood, and she poisons the wolf so she lives but her Grandmother is still deceased. Okay… points for creativity. Not to mention everyone losing it over Ryuto’s version.

Ryo gave an interpretations of ‘Momotaro’… Which was abridged but more accurate then Ryuto’s story. Still, be ad-libbed a lot… and because everyone was laughing no one would fall asleep listening to these stories…

April 8th video was… doing an improvised play. Ryo immediately suggests one relating to a baseball team that just lost an important match on their way to Koushien (a big high school level baseball game).

Things absolutely escalated quickly with Soya being the reason they lost but he has heart disease, Mizuki it the coach and Soya’s father, Ryo is the female manager who is secretly dating Soya and just wow. Way to add on the dramatic flare guys. They evaluated afterwards and realized they completely missed their goal. There’s always next time! And they had fun, which is what matters.

They then tried to improv at high school girls… but I don’t think a single one of them knows how girls talk to each other. Except maybe Yuto because nothing spells friendship between women then yelling that everyone looks cute! (Lord knows that I yell that at my friends) But they quickly stopped that and decided to try again later.

April 15th, was pretty high energy since they were comparing their speeds to the world records men’s 100 meter speed skating record which is 9 seconds and 58 milliseconds? It’s filmed at Tokyo Dome Roller Area (which I did not know was there). Pretty nifty stuff.

I didn’t screen shot a lot since the quality, even at 1080p, was weird. Like even when they were just standing and talking it was blurry. I’m not really sure what was going on with the video equipment since their other videos were fine. Hopefully it’s just a one time thing.

The ranking is: Sakuma Ryuto, Igari Soya (their expected winner), Takahashi Yuto, Inoue Mizuki and then Hashimoto Ryo. Not quite the results they were expecting, but it was fun to witness.

Overall: Again, I’m surprised they’re not as click-bait-y as the other groups but I’m actually glad they’re not. Their videos completely embody the idea of “Boys being Boys” in the best of ways. I’m really looking forward to seeing more from them! Give me a performance video! I want to see what roller skating choreography looks like!